Up And Running With Git And Powershell

We’ve all experienced a time where we use our pc’s for a prolonged period of time, accumulating a ton of crap along the way as we try out various technologies and fads. After a while, the pc begins to do funny things like crash for no apparent reason. This week, I needed to rebuild my dev machine and decided to change from Atlassian’s Source Tree over to Powershell and raw git.

If i’m honest, i wish I made the change earlier. I no longer have a confusing UI to deal with, just me, my memory and when that fails, Google. So in this post, I will show you what I’ve done in hopes that it will help someone else. We will run through:

Setting up git for the first time

First of all, you need to download the latest version of git from here. At the time of writing, the version is: 1.9.5 released 2 months ago. When you start the setup program, everything is down to personal preference (eg: where you install, windows explorer integration) until you see the following screen: 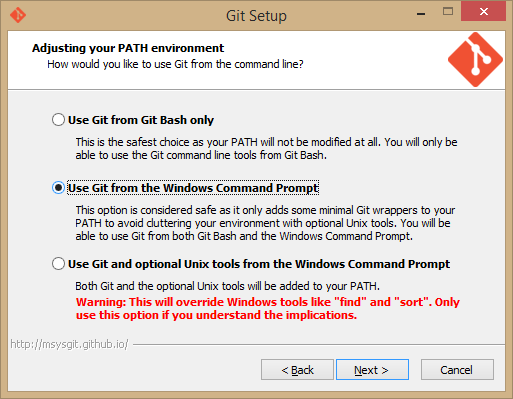 Following this, it is another case of common sense rules with choosing the style of line endings you need, typically checkin as-is suits (the last option).

When this is done, verify by heading into powershell/command prompt and typing:

This should produce something similar to the following output:

If you get that, you’re ready for the next step. Otherwise, you will need to add the path to your git installation to the environment variables.

Setting up Powershell so we can use git

After you have verified the execution policy above, you will be able to run the following script:

This will do two different things:

After the installation, you will see the following output in the console (highlighted in bright green, so its easier to see):

If you don’t see that, refer to the installation guides of the various modules as listed above. Otherwise, we are technically done setting up powershell with git. Now we can do awesome things such as download new powershell modules from the ps-get directory, view the current status of a git repo and much much more.

A repository will now show something along the lines of the following if you feel the need to verify:

Some of the output that we get using the built in git diff command is a little horrid: 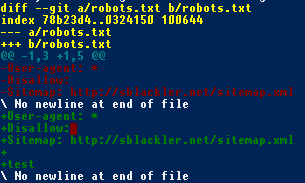 What Out-Diff does is create a unifed diff for you using the Unified Diff Format.

To install the Out-Diff, use the same powershell console as earlier and type/copy:

After that you should see the following confirmation:

Now, when we run out git diff command, we add a slight twist pointing it to the Out-Diff function like:

This results in brighter colours in the console and slightly cleaner output. If the output of git diff consists of many lines of text, PowerShell will redirect them to the Out-Diff function one line at a time. This is called a streaming pipeline and it allows PowerShell to be responsive and consume less memory even when processing large amounts of data.

Creating helper functions and setting up a powershell profile

The current powershell profile we are in comes in a variable called $PROFILE and we can hack this to do what we want. First of all, you need to expand that variable in the powershell window eg:

Which launches the powershell scripting environment. Currently, my profile is blank and only loads the Posh-git sample profile:

When you reload the powershell console you may have seen that it couldn’t find the ssh-agent. This is something that we can fix here. To do that, add the following line to the top of the file:

Unfortunately we have to do this because msysgit doesn’t automatically add that folder to the path variable. Then we can do really cool things after the Posh-git profile has been loaded like setting our base directory:

Creating a better diff function so that we don’t have to type it out everytime:

Or ever start our preffered IDE when we hit a solution file (vs only):

Here is only a small number of things that you can do now. So go git the power(shell). When you’re done save the profile and reload the powershell console for the changes to take effect.

If you haven't already, subscribe to my new YouTube Channel, Code With Stu. Here you'll find different tip, tricks and tutorials using some of the latest technologies, in bitesize chunks.

← Technical Debt: How We Get It And How To Avoid It 3 Easy Steps To Configuring Azure With Powershell →