Ever wondered how to get docker images to run nicely with XUnit tests? Then you’re in the right place. Let me show you how to setup Localstack with XUnit properly so that the only thing you need to worry about is having docker running. I’m using Localstack as the example but you can repeat a very similar process using the techniques shown here.

To verify that we have everything working as we expect later on, I have the following test case which will require that a table be created with a specific name. If we do everything correctly, then this test should pass.

The first feature that of XUnit that we are going to take a look at is lifecycle management with IAsyncLifetime. We’re going to use this to create an instance of a Localstack container later on, but we need to setup a class initially to use it with our second XUnitFeature. When we add this interface to a class, we tell XUnit that it needs to start and dispose of this implementation in an asynchronous manner. This means that we need to implement two methods:

So lets create a class called LocalstackContainer and stub out the methods for us to complete later on:

The next feature of XUnit we are going to rely on is Collection Fixtures. This allows us to have a singleton instance of an object for all tests unlike a ClassFixture which only allows us to have a singleton instance for test that inherit from the class fixture. The reason I am opt-ing for a collection fixture is so that we reduce the number instances of the localstack container because it can be quite heavy to run. If you think you can get away with a regular class fixture for your project you can definitely do that.

Let’s take a look at the collection definition first. XUnit needs this for discovery purposes and requires us to do two things to our class:

And that’s for the collection definition. If we move across to our test class now, where I have already pre-populated this with a random test that will ensure that everything is working later on.

To make use of the collection definition we need to add a class level attribute called Collection and pass in the same name that we gave to the CollectionDefinition attribute on the previous class. So here we will use the same nameof expression so that everything lines up nicely for us.

The last bit is to create a new constructor in our test class and add a parameter for our new type - which for us is going to be our localstack container.

So at this point, we have a XUnit all configured to use a single instance of a container class that has an asynchronous lifetime managed for us. Let’s start spinning up a docker container…

If you haven’t heard of test containers before, you really need to go and check the project out. We are going to use TestContainers to spin up a new instance of localstack in our tests using the localstack container class that we created earlier. First up, lets create two properties, one for the localstack port that we’re going to use and the next for a generated URL using the new port number just to make our lives a bit easier later on.

We then need to create a private field to hold the container so we can implement the lifecycle events later on:

In the constructor is where we are going to create the container definition. We create a new instance of TestcontainersBuilder with the type TestcontainersContainer from which we can configure this container. We need to call a few methods on this instance:

Once that’s all done, we can then build the container definition. Next we need to go and configure the lifecycle events to start and stop our container:

In the InitializeAsync method, we first need to create a new CancellationTokenSource so that we can abort any slow start ups if we need to. Then we call StartAsync on the container instance we setup earlier, remembering to pass in the cancellation token.

Before we can test this, we need to ensure that we update our tests to look at the new localstack URL:

With this now done, we are in a suitable point where we can test the entire flow and watch our docker container spin up and teardown without any effort other than clicking run on the tests. The test will still fail at this point, but the lifecycle of our docker image is now managed.

Now that we have a container up and running, we want the ability to to seed it with something useful, such as data for a dynamodb table. In order to do this, we need to change our container configuration a bit.

We are going to create two directories for our data:

Under the aws-seed-data directory, create a new file called init.sh ensuring that the line endings are set to LF only. This file will help us control the ordering and invocation of sub-scripts later on.

Next under the scripts sub-directory, create a new script called dynamodb.sh. In here we are going to create a new dynamo db table using the awslocal command. This command is essentially a fully fledged AWS CLI but you never have to set the endpoint, which makes it super handy for scripting. In my example here, I’m just creating a dynamo table as I would normally, just switch aws for awslocal. Although I’m not doing it here, you can do a lot of fancy things like pre-seeding the dynamo table with a set amount of data for example. 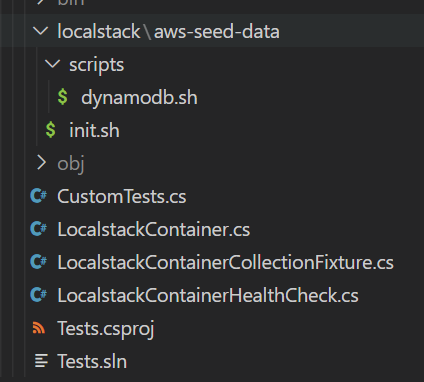 Inside of our init script, we need to have the following:

Note that the forward slash at the start is very important as your just about to see.

Inside of our dynamodb.sh script, we need to have the following:

If we now head back to our localstack container instance, we need to adjust the setup to mount our new seeding files. To do this we need the full path on the host that we want to mount and its corresponding destination in the docker image.

Localstack has a special folder in the image which is used to look for scripts at different parts of the initialization process - called /etc/localstack/init - this folder contains 4 directories:

We are going to mount the folder containing our init.sh script to the ready.d directory - so once localstack is ready it will execute that script. To do this, we call WithBindMount on the container image, passing in our folder followed by the folder in the docker image:

With our container now seeded, we have a slight ordering problem. Our tests may execute before our localstack instance has been fully provisioned. Luckily for us, both TestContainers and Localstack has us covered here.

Localstack has an endpoint that we can call to check the status of the initialization. This is located on the endpoint _localstack/init/ready.

TestContainers allows us to provide our own wait strategy too - so we can use that to create a new wait check by implementing the IWaitUntil class.

In the constructor of the wait check, we need to take a single parameter which is going to be the endpoint that localstack will be listening on. In the Until method we need to make a quick call to the API. The structure of the json returned has a completed object that has keys for each of the initialization phases. It also has a scripts section which contains a list of scripts for each stage and their corresponding states. We just need to look for the init.sh script in READY stage and ensure that it has the state SUCCESSFUL:

The last bit for us to do is to configure the wait strategy for the container. In the container definition, we need to call a method called WithWaitStrategy. This takes one or more wait strategies which are built using the Wait class. The first thing we need to do here is tell Testcontainers that we are going to be waiting for a linux container by calling Wait.ForUnixContainer - then we can add two additional methods:

With all of these steps completed, you should now have tests that are nice and repeatable using XUnit and Localstack! If you’re wondering what else you’re missing out on, check out some of the latest features in .NET 7 you may have missed.

The full code for this is available to my Github Sponsors.

Everything contained in the kits below is something that I am actively using day to day, or I've previously used extensively/read. I only list the products that I would personally buy again. All links are redirect to Amazon.

Offers From My Partners